Six years ago I gave a lecture in Sydney explaining that :

Well, the Sydney Morning Herald has picked up on one of these silly life satisfaction/happiness surveys which has (finally) cast doubt over the “everything is hunky dory in old age” conclusion….which was what they were proclaiming, along with the US and UK media, until recently, when questions over such “happiness/life satisfaction” methods began to be raised on the back of (now not particularly “new” academic research). Better late than never I suppose.

But do you know why this is so frustrating?

The methods to properly value well-being/quality of life quantitatively, without using these “life satisfaction numbers” were developed – ON THE BACK OF AUSTRALIAN RESEARCH – in 2008 and applied in the UK and Australia very quickly by me and my colleagues.

Why is asking a person for a numerical score bad? Well the bottom line, these were debunked by 2001 in the top academic marketing journals in the world. Did you know that “4” in Mandarin also has connotations with “death” and so is considered an unlucky (and unused) number by a lot of Chinese people? That two other numbers we could use in these scales have a Cantonese connotation with something that an internet family filter will kill – suffice to say “flaccid” and “hard” are the relevant descriptors.

And the ironic thing? All this work came together based on work done in Sydney 10 years ago.

But the Sydney Morning Herald, although running one or two little pieces on quiet news days, never had the courage to showcase that Australian research. It wasn’t until the Brits and the Yanks showed it that it now appears as a major article. Tall poppy Syndrome anyone?

For almost 6 years I worked just down the road from the SMH and the ABC, yet was only asked to do “filler” stories. I feel sad rather than annoyed. By the time I left Australia I’d realised what the score was. It’s a shame. Sexy news, rather than good research wins out – and that’s NOT specific to Australia. But when the result is whole generations of people being under-resourced, one has to stop for a moment and think.

There is a piece on happiness at NakedCapitalism.com up today. It is a guest post from VoxEU and unfortunately, though trying to make valid points, falls into the usual holes: the key one is that the data all appear to be Likert-based self-reported happiness scales, which in two major countries (at the very least) have been shown to be deeply misleading (US and Australia). In short, even within these two countries, there are cohort and/or longitudinal effects: the number you state your happiness/life satisfaction to be is heavily dependent upon age (particularly if you are older), independent of (after adjusting for) a huge number of other factors (health, wealth, social empowerment, independence, etc). Moreover this is not “just” the infamous “mid-life dip”: the differences between such measures, and the more comprehensive well-being/quality-of-life ones, are particularly stark in extreme old age and have big implications for retirement age, what resources are needed by the very old etc.

To make comparisons across countries with different cultural backgrounds seems even more hazardous – Likert scales generally were pretty much discredited on such grounds by 2001: 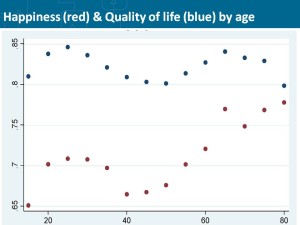 The above shows that the ICECAP-O measure (based on discrete choice based outcomes of McFadden, coupled with Capabilities Approach of Sen, both winners of the Economics “Nobel”) tracks happiness (after both rescaled to be on 0-1 scale) reasonably well til middle age. In old age people report suspiciously high life satisfaction/happiness scores even when they have a whole host of problems in their lives. We captured these in the ICECAP-O (collected from the same people who gave us life satisfaction scores), as well as their individual answers to a huge number of questions about these other factors in life. This has been found in the USA too: 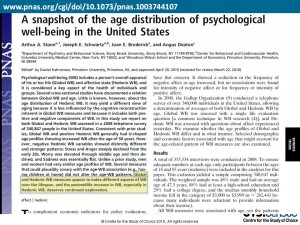 In short, we don’t have a bloody clue what older people are doing when they answer these scales but sure aren’t doing the same thing as younger people.

I discussed further the contribution of trust toward a broad measure of well-being in a talk I gave years ago when in Sydney: in Australia it is basically the case that a lack of trust of those in the local community has a pretty huge (11%) detrimental effect to your quality of life in Sydney but a much smaller, though still significant (5%) effect elsewhere in Australia.

I wish these Likert-based happiness surveys would cease. They really don’t help the field, when much better alternatives are already in routine use.

The subject of happiness, particularly among older people, has come up (again) in the media. I reckon they trot out the latest survey results whenever there’s a slow news day. I think it’s no coincidence the newest stories have appeared in the slow month of August.

Anyway I shall keep this short as I’ll rant otherwise. Once again, neither happiness nor life satisfaction is the same as quality of life and we can argue til the cows come home as to which of the three (if any) is truly well-being.

First of all, if I can find the time to write up a follow-up to the paper I published on the mid 2000s survey of Bristolians I will show this: 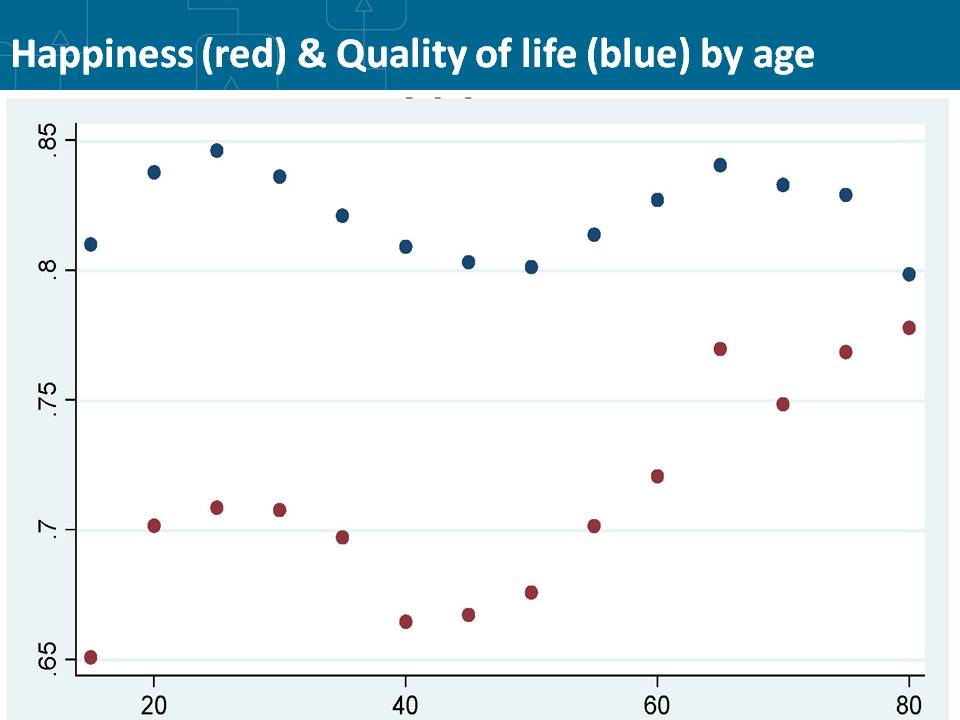 The two track reasonably closely until retirement age. Then whilst happiness continues to rise, quality of life certainly does not. The wealth of other evidence on health, money, friends, etc from the survey suggests our QoL, the ICECAP-O instrument, is the better measure of overall well-being.

We are not the only ones to find this. A large US study pretty much concluded they didn’t know WTF older people were doing when they answered life satisfaction/happiness questions but they sure don’t answer them the same way that younger adults do. Older people use a different part of the numerical scale (typically a higher portion, all other things being equal). That’s rating scale bias and there is a huge and growing literature on it.

Stop asking these dumb questions. There are good alternatives.

Yet another reason happiness scales are rubbish. You can radically change rankings depending on how people classify themselves (the link function)!

BTW I stayed for a night at the Thistle hotel at East Midlands Airport on my return from Gran Canaria.

(1) No lift (elevator) for getting above the ground floor

(2) They put me in a previously used unserviced room before I had to complain, bring my luggage back down to ground floor.

(3) They charged my credit card for a room I’d pre-paid.

Don’t stay there – they’re either incompetent or crooks.

I’ve commented on a piece in the Guardian about the integration of health and social care in the UK and the options for individuals to have personal budgets.

I mentioned both the OSCA and ICECAP instruments – I wonder if all the millions of pounds of public money that went into developing these will actually come to fruition?

I hope those stupid happiness scores are not used – they’ve been debunked several times in several countries now, but certain arms of the British establishment seems dead set on them.

Aussies take note – there is a conference I am speaking at on this very subject in Sydney in late May.

Great paper by one of the top Capabilities Approach researchers, Martha Nussbaum – it decimates the fad for happiness economics that infests public policy, particularly in the UK.

Of course, the ICECAP instruments are based on the Capabilities Approach and I have shown empirically (when I get round to publishing it) that ICECAP-O differs from a happiness/life satisfaction score measure in exactly the way Nussbaum predicts.